Harnessing the Power of Community in Pursuit of Zero Suicide

The Zero Suicide movement is an international movement which aims to eliminate suicide by way of radical healthcare system redesign1. In early 2017, within Brevard County, Florida, an international hub for aerospace and home to the Kennedy Space Center, a community based task force was assembled to intervene when the pediatric suicide rate reached one of the highest rates in the State of Florida. Pediatric Mental Health was previously identified as a top priority on multiple community health needs assessments performed by organizations throughout the region. Within the ensuing 24 months, a community wide evidence based technical package to prevent suicide was implemented and the pediatric suicide rate was reduced to near zero, the lowest rate the region had seen in over 20 years.

Over the past decade, the rate of suicide has continued to climb inside the United States2,3. Pediatric mental illness continues to take center stage as school shootings and other unfortunate outcomes related to mental illness are becoming commonplace in society and in the news media. Within this context, an international movement to achieve zero suicides has developed, catalyzed by the initial work within the Henry Ford Health System4,5. Despite the worldwide growth of the Zero Suicide movement, there continues to be a dearth of outcome studies measuring completed suicides in the various regions across the globe which have reportedly implemented the objective.

The State of Florida is consistently ranked among the lowest for mental healthcare expenditure per capita in comparison to other States6. Within Brevard County, Florida, the pediatric suicide rate for 2017 was one of the highest in the State of Florida and represented ongoing significant increases from prior years. Postmortem review of the suicide deaths indicated that the majority of these deaths did not have a health system contact in the months preceding the suicide. Pediatric mental health was identified as a critical priority on multiple community health needs assessments performed by organizations throughout the region7,8. Furthermore, the opioid epidemic had also taken its toll on Brevard County, leading Brevard to experience the third highest rate of overdose mortality within the State of Florida9. In this context, multiple members of the community called upon regional health network leadership, the newly arrived Health Network Chairman of Psychiatry and Behavioral Health Services, to guide them in the pursuit of reducing pediatric suicide. Said leadership, assessed the situation and advised that elimination of pediatric suicide was within the realm of possibility. The Health Network Chairman introduced the concept of a Community Task Force and provided vision and advisement at every stage of its activity.

The determined goal was straightforward and was selected by the community Task Force– eliminate pediatric suicide. Given the fact that most of the suicides did not have contact with a health system in the months prior to their deaths, it was determined that the intervention needed to be focused heavily within the community. Previously published Zero Suicide initiatives, on the other hand, traditionally functioned within the confines of the health system4,5,10.

The Task Force was initially comprised of numerous community activists, school teachers, concerned parents, students, and a few mental health system leaders who gathered together to discuss the problem. In the past, when such tragedies struck the community, there was a tendency to have town-hall discussions that did not lead to longitudinal, cross-sectional interventions that could systematically address a particular health outcome or social determinant of health. Upon advisement from the Health Network Chairman, it was decided that a town-hall type discussion was not the answer and the notion of an ongoing workgroup was introduced and agreed upon. The Task Force was initially led by the Health Network Chairman, an elementary school teacher, and a community activist. The preliminary undertaking was to determine the optimal composition of the Task Force given the overarching goal and the need to build upon existing momentum to further charge the community with the unique challenge of achieving zero pediatric suicides. Because the Task Force was completely voluntary and community based, the decision was made to welcome any person in the community who wanted to join but to also extend strategic invitations to leaders in various sectors across the region that had some ability to influence a child’s livelihood. Capitalizing upon momentum that was deliberately promulgated by community activists, invitations were sent to leaders within law enforcement, the school system, state legislature, the community 211 resource agency that provides referrals to health and social service organizations11, faith communities, municipal leadership, multiple healthcare organizations, health insurance organizations, the YMCA, and Boys’ and Girls’ Clubs. Initially most of the invited organizations agreed to have a representative join. In time, all of the aforementioned organizations joined the Task Force and participated to varying degrees. The Task Force also enlisted the volunteer efforts of a health system based six sigma black belt who guided the ongoing efforts in process improvement and assisted in facilitating select meetings.

The Task Force initially met monthly. After introductory meetings and a review of several approaches to target suicide in a community, the decision was made to utilize the 2017 Centers for Disease Control (CDC) Technical Package entitled, Preventing Suicide: A Technical Package of Policy, Programs, and Practices14. This evidence-based roadmap for transformation was ultimately chosen because of the heterogeneous composition of the Task Force and because of its emphasis on transformational change in a community versus a more narrowly tailored intervention housed within the healthcare system.

After selecting the roadmap, the Task Force divided into multiple committees based upon each strategy category of the 2017 CDC Technical Package14. Task Force members were asked to join committees based on their self-perceived ability to create positive change and contribute on the committee subject matter. These committees included the following:

Numerous interventions were undertaken by the Task Force. Some select examples of the many follow:

Task Force members successfully worked with health insurance organizations to include coverage provisions allowing home-based or school-based services for their members. Lack of transportation hindered many children from attending mental health related appointments. To target the problem of lack of transportation hindering access to care, a successful ride sharing initiative was developed and is now underway. Multiple Task Force members with key affiliations played roles in its design, funding, and implementation.

Identify and Support People at Risk

Numerous gatekeeper trainings were conducted within the community and school system. Task Force members participated in ongoing efforts working with the health system, standardizing pediatric mental health risk assessment across health settings and removing barriers to the communication of salient health information between health system and school system. Within the school system, substantial, ongoing changes were made to the timeliness and appropriateness of mental health screening, referral to services, and communication of salient health information internally and externally. The school system added staff and redefined the roles of select members of existing staff to focus more intensely on student mental health and wellness, removing said staff’s occupational emphasis from the administrative tasks with which they were previously burdened.

In order to lessen harms, prevent future risk, create protective environments, regional media outlets were utilized to provide ongoing coverage of Task Force efforts. Task Force members were also given the opportunity to write regular newspaper columns on topics related to mental health. The subject matters of the columns were deliberately crafted with the intention of dampening stigma and increasing help seeking behavior, drawing upon any available evidence-based data when formulating the content17. Social media was utilized to the same end. Student members of the Task Force played an ongoing active role in that domain.

The work toward the roadmap is ongoing. Projects described above continue to be part of the Task Force efforts. Additionally, new targets continue to be developed. These include working with law enforcement agencies to utilize standardized-actionable suicide risk assessment tools, destigmatizing the involuntary commitment process, and working with not-for-profits towards the provision of affordable housing for those in need.

The outcome of this community wide effort was a substantial and significant 90% reduction in the pediatric suicide rate when compared to the startup year rate. 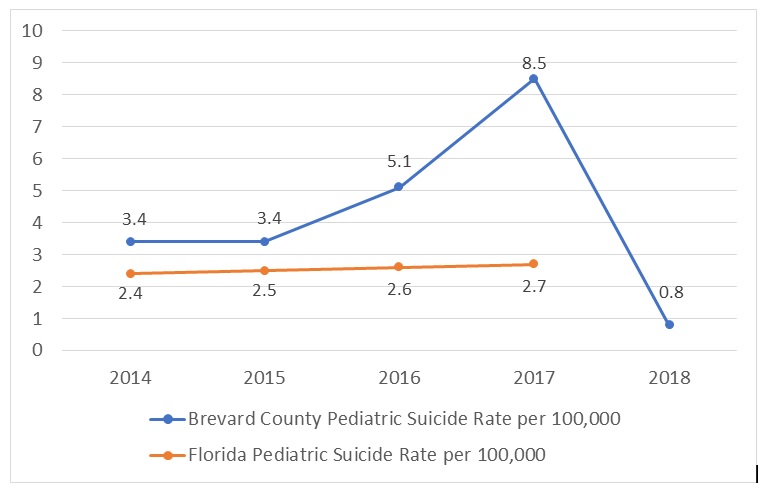 The suicide data was obtained directly from the county medical examiner’s office and from the Florida Department of Public Health.

In an attempt to ensure other relevant external factors were not impacting the suicide rate, we also examined the county unemployment rate, firearm licenses, and census divorce rate which were relatively stable throughout the years examined18,19,20. The 2018 divorce rate was not available at time of this writing.

The promising results of this case report illustrate how the health system can serve as a guidepost for a community to address the health needs that matter most to a community. It also demonstrates how the community health needs assessments that health systems and other social service organizations conduct have the ability to shed light on areas where communities are ripe for systemic health intervention7,8.

Furthermore, the results of this case report support the previously established notion that the utilization of an evidence based roadmap can make a significant impact on the suicide rate of a population4,5. Unlike previous work, this report suggests that an evidence based technical package targeting suicide can be successfully implemented to target an entire community and does not have to be centralized within a single organization focusing on a subset of individuals. This report also distinguishes itself from prior work in that it was solely focused on a pediatric population.

Given the fact that this health initiative encompassed a portfolio of sub interventions targeting suicide housed within the CDC roadmap, it is difficult to elucidate the impact of each specific intervention towards the final outcome.